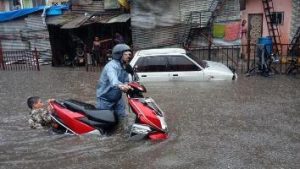 Torrential rains between Monday night and Tuesday morning led to Mumbai recording its second highest July rain over a 24-hour period since 1975 or 44 years. It was the highest in 10 years. Exceptionally heavy overnight downpour took Mumbai’s rain total to 982.2 mm between June 1 and July 2, 8.30 am, which is in excess of 411.2 mm for this period.

Between 8.30 am Monday and 8.30 am Tuesday, the Santacruz weather station, representative of the suburbs and Mumbai, recorded 375.2 mm rain, falling under the ‘exceptionally heavy’ category (when the amount of rainfall is highest recorded for the season or over a decade, according to the India Meteorological Department). According to IMD, the last time the city recorded the exact figure was in 1974 in July at 375.2 mm.

The maximum quantum of rain was recorded between 11.30 pm and 8.30 am from Monday night to Tuesday morning with a whopping 241 mm rain recorded as the suburbs had recorded 134.2 mm till 11.30 pm Monday night. This led to severe flooding across many parts of the suburbs, delayed or cancelled flights as well as cancellation of the suburban train services.

Colaba, representative of south Mumbai, recorded ‘very heavy’ July rain at 137.8 mm between Monday 8.30 am and Tuesday 8.30 am.

The people asked to stay indoors, and the government offices have been kept shut. Several flights have been delayed or cancelled.  Mumbai local trains are running without any disruption between Churchgate and Vasai stations, Western Railway tweeted. 18 people have been killed in separate incidents due to heavy rains.