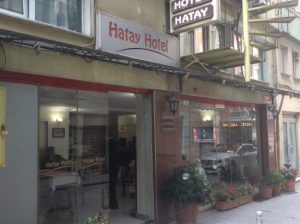 The visitors will soon be able to stay in a hotel in the eastern province of Hatay designed around and featuring archaeological finds dating back to the Hellenistic, Roman, Byzantine, Medieval and Islamic periods. The museum-hotel concept was inspired by the discovery of the artifacts nine years ago at the hotel construction site in the central district of Antakya.

The finding prompted nine years of excavations, initiated by the presidency of Hatay Museum Directorate and the Adana Regional Council for the Protection of Cultural Heritage. The archaeological digs revealed multiple layers of artifacts from different periods of history.

During the archeological excavations, while the construction of the hotel was in progress, the artifacts were carefully preserved in their original locations. Meanwhile, the Ministry of Culture and Tourism launched an effort to establish a museum where the artifacts were found.

The new museum, occupying an area of approximately 1,000 square meters, will exhibit unique relics from the past, including Hellenistic fortification walls, a mosaic fragment decorated with bird figures from the fifth century and a large, sprawling Roman bath complex.

The museum will also have a second-century mosaic depicting the Roman winged horse “Pegasus” surrounded by water nymphs and the world’s largest one-piece floor mosaic, which covers an area of 1,200 square meters and is believed to have been used as a public space in the sixth century.

Tourists, who visit the museum, may also book a room in the hotel built at the top of the museum.