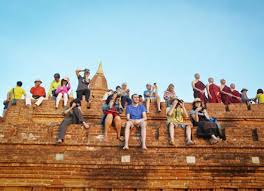 The numbers reflect reports of booking and tour cancellations by western tourists since late 2017, after news of violence in Rakhine was reported on a global scale. Tourism accounts for 2.7pc of Myanmar’s GDP.

Officials are of the opinion that the tourism industry will continue to come under pressure this year and for as long as the Rakhine crisis remains an issue.

“Tourist arrivals from the west are expected to continue experiencing low growth this year and cannot be counted on to boost the tourism sector,” said U Khin Aung Htun, the vice chair of the Myanmar Tourism Federation.

To make up for the west’s impact on tourism, Myanmar has doubled up its efforts to attract tourists from Asia.

Due to relaxation of visa requirements for travellers from those countries, tourism businesses are aiming to see a 50pc rise in visitors from eastern countries this year.