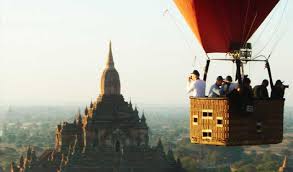 Memories Group Ltd., the largest operator of balloons in Myanmar, shot up as much as 30 per cent above its placement price in its debut session on the Singapore stock exchange on Friday.

Memories Group is a 47.6 per cent owner of Burmese conglomerate Yoma Strategic Holdings Ltd, which spun off its Myanmar tourism assets via a reverse takeover of SHC Capital Asia.

The company raised S$10.7 million in a placement of 42.6 million new shares and 7.4 million vendor shares at S$0.25 per piece, which ended on Wednesday. The stock trades under the MEGL ticker, and climbed as high as 32.5 per cent Singapore cents. The Straits Times Index fell 0.2 per cent.

“Tourism is one of the lowest-hanging fruits that will have exponential growth and we felt it was the right time to actually have an independent, dedicated platform to develop the tourism business,” Serge Pun, founder of Yoma Strategic and executive chairman in both companies, said in an interview in Singapore. His son, Melvyn Pun, an ex-Goldman Sachs Group Inc investment banker, is the chief executive officer of Yoma.

At $450 a person, a hot-air balloon ride is worth about a third of Myanmar’s gross domestic product per capita in 2016. International tourist spending in the country is estimated to reach $5.2 billion in 2027, more than double the $2.3 billion spent in 2016, according to a report by the World Travel & Tourism Council. More than 22,000 visitors rode on Memories Group’s balloons last fiscal year, Mr Pun said.

Memories Group is targeting high-end tourists with hotels and services and intends to acquire more tourism-related businesses with the proceeds of its placement, Mr Pun informed.