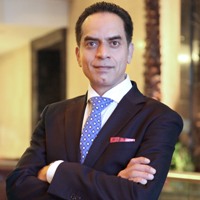 Nagesh Chawla appointed as Cluster General Manager at Renaissance Mumbai Convention Centre Hotel & Lakeside Chalet – Mumbai, Marriott Executive Apartments. An industry veteran, always at the helm of affairs, who has steered the ship clear through tides of time, Nagesh Chawla is an endearing and inspiring presence.

Recognised as a knowledge powerhouse in the hospitality world, his impeccable work history and wealth of experience leads to the beginning of him steering the flagship as the Cluster General Manager for Renaissance Mumbai Convention Centre Hotel & Lakeside Chalet – Mumbai, Marriott Executive Apartments, Marriott India’s largest multi-dimensional lifestyle complex.

Passion, uncompromising adherence to the highest standards, attention to detail, a people’s manager and a goal-oriented management approach define him as the leader that he is. Almost two decades ago, Nagesh began his stint as a Front Office Manager at Renaissance Mumbai, and with sincere efforts and dedication, developed as the Director of Rooms. He eventually moved to JW Marriott Hotel & Marriott Executive Apartments, Tomorrow Square, Shanghai and thereafter took over the JW Marriott Hotel, Hong Kong as the Resident Manager. In his previous role, he was the Managing Director for The Ritz-Carlton Jakarta and JW Marriott Hotel Jakarta.

Nagesh holds a degree in Hotel Management from International College of Tourism and Hotel Management, Vienna-Austria. With perseverance and the zeal to learn, he has scaled to exceptional heights which have also garnered him accolades including Excellence in Driving Guest experience Award 2009, Continent General Manager of the year 2011, General Manager Sales Leadership for the year 2013 and so on.

With a gamut of responsibilities, his new role will have him overlooking the entire hotel operations as well as working closely with the leadership roles of all departments.

A globetrotter by heart, with his 7-year old twins as his stress busters. On his expression about living life, he said that like life, his job is full of trials and errors, but it allows him to develop. This cycle enables him to learn his mistakes and work together to find solutions for them.