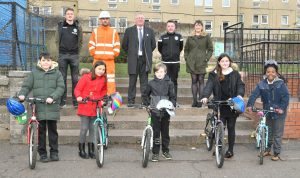 The second-hand bikes were reconditioned voluntarily by Simon Lloyd, a customer support assistant with Network Rail at Edinburgh Waverley  and have been donated to Abbeyhill Primary School as an early Christmas gift for pupils this festive season.

Edinburgh Cheer, in its third year, is a city-wide partnership which aims to help make Scotland’s capital the kindest city during the festive period.

Network Rail, Story Contracting and Hibernian FC Community Foundation, three of the charity partners involved in the campaign, were there to join in the fun as the Abbeyhill Primary School children tried out the gifted bikes.

William Jack, station interface manager for Network Rail at Edinburgh Waverley, said: “Simon has done a fantastic job reconditioning the bikes. We support all efforts to encourage sustainable transport so we were only too happy to donate the bikes, helmets and safety gear to our local school as part of the Edinburgh Cheer campaign.  We hope they bring the children lots of enjoyment all year round.”

Sally Ketchin, head teacher at Abbeyhill Primary School, said: “We would like to thank Network Rail and their partners for the donation of the bikes and equipment.  The school is hosting a free raffle for the parents to enter to give away the bikes to good homes.  It’s such a wonderful early Christmas present for some lucky pupils.”