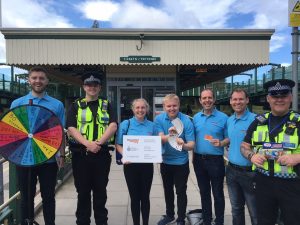 This project was also supported by physical mitigations, including additional fencing inspections and working with the British Transport Police to increase patrols during the peak season in repeat trespass locations. Following the campaign, Network Rail has already seen a decrease in incidents with young people in target locations and high risk areas.

“The level of engagement throughout the summer has been a great success. By working with Bollo, we were able to spread our message further than before and target the essential communities in north Wales that see high levels of trespass.

“Thank you to everyone who was involved and to everyone who engaged with us and helped raise awareness of the dangers of trespassing on the railway throughout the summer.”

“It was absolutely fantastic to be involved in such an essential and relevant project alongside Network Rail and the British Transport Police. Although we had a lot of fun interacting with the people of north Wales and their visitors over the summer, it was more important that we were able to help spread these vital rail safety messages to keep people off the tracks.”

Last year, Network Rail and the British Transport Police launched the You vs Train campaign. Since then, the number of incidents involving children fell by 12% but young people continue to put themselves at high risk.