Network Rail On-Track to Deliver £8m of Upgrades This Christmas 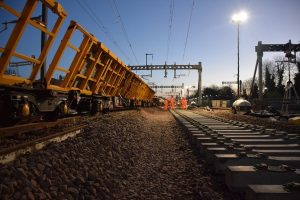 Network Rail engineers will deliver £8m of enhancements on Scotland’s Railway over the Christmas and New Year holidays.

More than 2,500 railway staff will be out at sites across the country to complete vital projects – renewing life-expired tracks and junctions, upgrading signalling systems and enhancing our major stations.

In Edinburgh, From Christmas Day to December 29, Haymarket East junction will undergo a major upgrade – including renewing four sets of points (rails which move to transfer trains from one line to another) and replacing 250m of track.

One of the busiest junctions on Scotland’s Railway, Haymarket East is used by up to 30 trains an hour. This upgrade will help to improve the reliability of the track and will mean the junction won’t need to be renewed again for decades.

On Friday, December 27, and Saturday, December 28, trains will be unable to pass through Haymarket and a replacement bus service will be in operation into Edinburgh Waverley from stations to the west of the city.

In Glasgow, on Christmas Day and Boxing Day, new track will be laid on the approach to Glasgow Central station with engineers working to renew 300m of line at Shields Road on the south of the Clyde.

Kris Kinnear, Network Rail Scotland’s capital delivery director, said: “These projects are vital to the long-term future of Scotland’s Railway and part of the £4bn investment being made in our network over the next five years.

“Renewing this ageing infrastructure will improve the reliability of the service we provide and will also help to reduce long-term maintenance costs.

“Renewing complex infrastructure cannot be accomplished without short-term closure of the railway and we work over Bank Holidays to try to limit disruption for our customers as fewer people travel at this time. Our engineers have carefully planned these projects to be completed as quickly as possible.”

Across Britain, Network Rail will be investing £111m over the festive period to improve and upgrade the rail network with 20,000 members of staff working at more than 300 sites.