New attraction to the Statue of Unity – helicopter ride 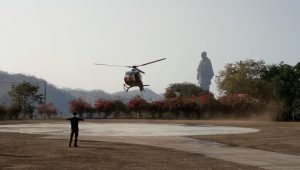 The helicopter ride provides tourists a panoramic view of the Statue of Unity and Sardar Sarovar Dam, Narmada River, and the Satpura and Vindhya hills.

A ferry service has been introduced to avoid pollution and vehicular traffic. The statue and its surrounding areas can be accessed via special boats.

The Gujarat government has written to the chief ministers to set up guest houses near the Statue of Unity. The statue was built at a cost of around Rs 3,000 crore. On an average, about 15,000 tourists came to Kevadia to see the statue every day. The statue is built on an American structure. It has an audio gallery and museum which depicts the life of India’s iron man.