New Direct Route to Warsaw from Stockholm Arlanda with SAS 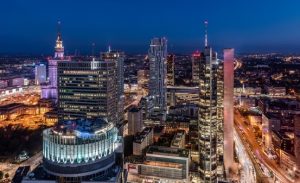 Scandinavian Airlines (SAS) is expanding at Stockholm Arlanda Airport and will launch non-stop service to the polish capital Warsaw. This new route increases the range of destinations with yet one more route to the growing market of Poland.

SAS continues to expand its network of routes from Stockholm Arlanda and will launch non-stop service to the Polish capital of Warsaw on May 1, 2020.

More than 40 per cent of passengers flying to or from Stockholm Arlanda and to or from Poland travel for business purposes. A large percentage also travel to visit friends and family or as tourists. Warsaw and Poland in general have grown in attractiveness and economic importance in recent years. This is an expanding market, and many large Swedish companies have operations in the Warsaw region.

Poland is likewise increasingly important in terms of visitors travelling to the Stockholm region, with such visitors showing continued steady growth in 2019, almost 30 per cent calculated in commercial overnight stays. In November, Poland was the thirteenth largest foreign market.

“We welcome the investment SAS is making in the Stockholm region by launching another international route from Stockholm Arlanda. The new service will increase accessibility between two fast-growing economic hubs and is important for both business and leisure travellers in both directions. There is ever growing interest in Poland, and Warsaw is increasing in attractiveness. Similarly, the route meets an increased demand from Polish travellers who want to visit the expanding Stockholm region in business or as a leisure destination,” says Elizabeth Axtelius, Director Aviation Business at Swedavia.

“We are delighted to be able to offer an additional route with an attractive timetable connecting Warsaw with Scandinavia directly from Arlanda. The links between the two regions are strong, and we are happy to be able to increase our offering to the large number of business travellers,” says Karl Sandlund, Executive Vice President Commercial at SAS.

The direct route Stockholm Arlanda (ARN) – Warsaw Chopin (WAW) will be flown twice weekly on weekdays and once on Sundays beginning May 1, 2020. The timetable is adapted to business travellers, with morning and afternoon departures. SAS will be the second carrier to serve this route.

Passengers who fly with SAS can voluntarily choose to purchase biofuel and thus help cut carbon dioxide emissions by up to 80 per cent in order to reduce their climate impact. As part of SAS’s climate change adaptation, the carrier has also chosen to carbon-offset all tickets for which a EuroBonus number is provided when the ticket is booked.

For many years, Swedavia has carried out ambitious sustainability work. All ten of its airports shall have zero emissions of fossil carbon dioxide from their own operations by 2020. Swedavia also works actively to promote the industry’s transition to bio fuel and has the goal that five per cent of all fuel used to refuel aircraft at Swedish airports shall be fossil-free by 2025.