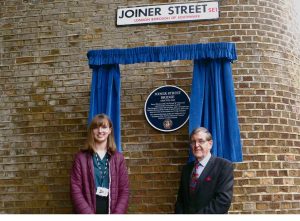 The plaque, which commemorates the historic ‘Warren’ trusses at London Bridge station, has been unveiled by the Railway Heritage Trust.

People using London Bridge station can now learn a little bit more about the history of engineering at the station via a new historical plaque which marks six Warren trusses, originally built in 1849 to enable a railway viaduct to be widened

The trusses are located above the northern side of Joiner Street (close to the London Underground station). Network Rail has worked with the Railway Heritage Trust to clean up and restore the trusses as part of the Thameslink Programme’s redevelopment of London Bridge station.

“We’re delighted to recognise this important piece of industrial history with a blue plaque at London Bridge. It’s fantastic that we’ve been able to preserve so much of the station’s heritage despite the huge amount of change at London Bridge over the last few years.”

“The RHT has been delighted to sponsor the retention and restoration of heritage features at London Bridge, with grants totalling over £650,000 during the project. The Warren Trusses are a wonderful early example of this structural form and have been a hidden feature of the station for too long. Their restoration, and the tidying up of the area around them, puts them on display in a way they never have been in the last 170 years.”

The Warren trusses at London Bridge are significant as they represent surviving examples of the development of composite iron construction in the 1840s. They take their name from the engineer James Warren (1802–1870) who took out a patent for this form of truss in 1848.

As can be seen at Joiner Street, a Warren truss consists of a series of equilateral triangles joined by top and bottom chords. The trusses are of varying lengths, from 15m to 21m, to accommodate the layout of Joiner Street at its junction with Tooley Street.

The heritage plaque is not the only change on Joiner Street recently. As part of the South East route’s station transformation plan, Joiner Street has had a makeover to improve the look and feel of the interchange area between the national rail station and the Tube station.

Brickwork has been cleaned and re-pointed, redundant service cables removed to tidy up the appearance of the area further, while a stylish brown sheathing has been added to the ceiling to complete the transformation.