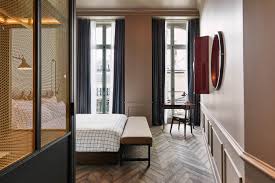 The new Hoxton Hotel will open in Chicago’s West Loop in April 2019. The London-based hotel brand chose the neighborhood around Fulton Market because of its rich industrial history and sense of community.

Sharan Pasricha, CEO of Ennismore, Hoxton’s parent company says, “It resembles a lot of where we started with our roots in East London… an industrial neighborhood that has an industrial past with a very creative future.”

The 186 rooms are welcomes visitors and locals as well. They have an open-house philosophy – a neighborhood town hall which is accessible, beautifully designed and not pretentious. Locals can hang around weather for coffee, lunch, or dinner.

The hotel base is a three-story podium that aligns with most buildings in the area, and rises to another nine stories. The color changes from red brick to black after the third story. Hoxton is working with Boka Restaurant Group on three restaurants in total, including a basement piano jazz bar and a third project still to come.