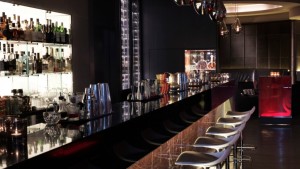 Moskovsky Bar invites guests to recall tastes and events significant for the city in the Soviet era, when the Hotel Moskva – now Four Seasons Hotel Moscow – was home to one of the most popular restaurants in the city, Ogni Moskvy. Reserving a table there was almost impossible and all visitors wanted to try itsfamous cocktails served in the heart of the city. One of them was Champagne Cobbler, which guests can enjoy today at Moskovsky Bar in its modern interpretation.

Another special memory of the past is the taste of chocolate candies with cherries and a drop of liquor inside. The bar’s cocktail Old Stamp is a nostalgic interpretation of this unforgettable bittersweet flavour.

At the turn of the century, in 2001, the Moscow International Business Centre project, “Moscow City,” caused controversy among those who believed that modern skyscrapers would never fit the historical landscape of the city. Yet today, it is hard to imagine Moscow without this majestic ensemble these days. Try the new Moscow Sunrise cocktail to taste the beautiful mixture of ingredients that seem to be incompatible at a glance.

Rye wine or polugar appeared in many works of Russian writers including Vladimir Gilyarovsky, famous for his reminiscences of life in pre-Revolutionary Moscow. Polugar is a progenitor of internationally renowned Russian vodka. Four Seasons invites guests on a journey to the past with the special cocktail Giliay, based in this strong historical drink.