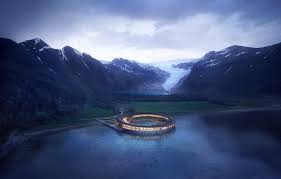 Norway’s section of the Arctic Circle is about to welcome a brand new hotel that would offer much more than just a place to stay to enjoy a stunning view of the fjords.

Considered the world’s first ‘energy-positive’ hotel the Svart Hotel is designed to establish a new standard in sustainable travel as per a news media platform.

Constructed by Arctic Adventure Norway that is a tourism company, an international architecture firm with headquarters in Oslo, it is one of the first buildings to be created as per the standards of Powerhouse.

It is a coalition of firms that is devoted to put up buildings that would produce more power over the course of 60 years than they would take to build, run and finally demolish.

It would be based on a fjord at the base of Svartisen, one of the biggest glaciers on the mainland of Norway and is a portion of Saltfjellet-Svartisen National Park.

The design of the hotel is aimed to make this facility as energy-efficient as possible. The architects mapped how the sun shines through mountains perennially, to introduce the circular structure.

When the sun is high in winter, terraces outside the rooms provide shadows that minimize the neceassity of air conditioning and the windows are angled to catch the low winter sun.

This keeps the building warm during cold winters. This new hotel is expected to utilize 85 percent less energy than a conventional hotel.

Svart will also produce its own energy through rooftop solar panels, though it would not have excess energy on hand year-round. Since it is located in the Arctic Circle, the hotel will have an abundance of sunlight during the summer, at which point it will sell its excess energy to the local electricity grid.

In the winter, when it is too dark for solar energy production, the hotel will buy energy back from the grid. Over the course of the year, it will still produce more energy than it uses, and over time, it will eventually produce enough excess energy to offset the energy that was used to build the structure (including the creation of the building materials).