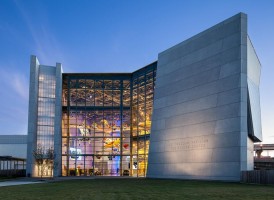 New Orleans’ National World War II Museum complex will see the addition of a new hotel and conference centre on the corner of the plot at Magazine Street and Andrew Higgins Boulevard in 2019. The building will take the name of Andrew Higgins of Higgins Industries, a prominent manufacturer of an important warcraft that participated in WW2, who was based in New Orleans. The Higgins Hotel and Conference Centre will rise 8 floors above the ground and boast 230 guest rooms and suites, as well as 18,000sqft of meeting space and a variety of restaurants and bars.

The hotel was announced in a ceremony in the Kushner Restoration Pavilion which is next to the site on which the hotel will be constructed. The hotel will be designed in an Art Deco style, but with contemporary twists, recalling war-era architecture yet situating it in a timely way in the cosmopolitan and cultural hub of New Orleans. Renderings released of the project show a fluted, chrome entrance typical of Art Deco architecture, and internally, feature lighting harks back to the classic design of the 1930’s. Luxurious materials such as glass and brass will be used to capture the sophistication and elegance of this period, and some of the hotel’s bars and restaurants are named after important wartime figures and events, such as the Kilroy Bar and Cafe Normandie. The bars and public amenities will be located on the ground floor, while conference and meeting facilities will occupy the second floor. Guest rooms and suites will take up the upper floors.

Brandon Berger, board chairman of World War II Theater Inc., said, “Today we’re celebrating the marriage of two of the things New Orleans does exceptionally well: the National World War II Museum and hospitality.” The hotel was always part of the masterpan for the museum, put had to be put on hold while other parts of the complex were being completed. The original site was different from that on which the hotel will eventually stand, but the project aims to provide accommodation for some of the 700,000 visitors that are flocking annually to the war museum, which is also badly in need of spaces to hold educational programs, which the new conference centre will be able to accommodate. The hotel will be operated by Hilton’s Curio Collection, and will be the first hotel under that brand name in New Orleans. New Orleans has seen an explosion of hotel openings in recent months, with new additions generating in the region of 3,000 new hotel rooms in the past few years.