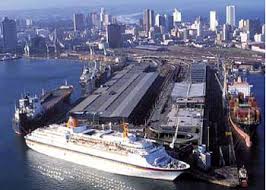 The Transnet National Ports Authority (TNPA) and the KwaZulu Cruise Terminal (KCT) signed on the agreement that will see the delivery of the facility at the Port of Durban by October 2020.

The detailed design phase has already commenced and is expected to be completed by the end of the year.

It will then followed by an 18-month construction phase from January 2019 to July 2020 and the cruise terminal is expected to commence operations in October 2020 kicking off the 2020-2021 cruise season.

Transnet Group chief executive Siyabonga Gama said the signing marked a crucial milestone towards achieving a slice of the market.

KwaZulu Cruise Terminal was announced last year as the preferred bidder for the 25 year concession project.

Gama said in a few years, the rise of a much-needed brand new cruise terminal for Durban would also see new technologies implemented and tourism numbers boosted for Durban and South Africa.

Transnet said the agreement was set to fundamentally change the current landscape being an epitome of an Africa that was rising and a marine economy that was re-inventing itself.

Gama said Transnet had adopted the Transnet 4.0 Strategy, which was focused on repositioning Transnet as a global integrated logistics service provider.

MSC South Africa chairman captain Salvatore Sarno said South Africa had been one of their preferred destinations since the beginning of their cruise activity.

Sarno said the new cruise terminal would be a world class and state of the art building accommodating crew vessels. It would be a multi-user terminal that would make Durban and the province of KwaZulu-Natal an attractive destination for all passenger ships cruising around the world.