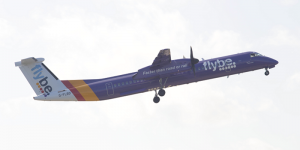 According to an accident investigation, an Inverness-bound aircraft landed without nose landing gear due to a damaged piece of equipment,.

On board the Flybe flight BE331 from Belfast City Airport on 10 November 2017, 53 passengers and four crew members were aboard the flight.

The crew indentified a problem with the nose gear and the aircraft was diverted to Belfast International Airport.

In its new report, it said a damaged piece of electrical equipment led to the nose gear failing to retract properly and to become jammed in the nose landing gear bay.

This then prevented the gear from extending again.

The AAIB said the manufacturer of the Bombardier Dash 8 aircraft had taken action to rectify the problem.

However, investigators said the aircraft was evacuated in an orderly manner.