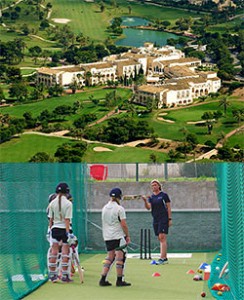 The award-winning venue in Murcia, south-east Spain, has teamed up with Smile in a new relationship that will see the Essex-based company extensively promote the resort in the UK on an initial three-year basis.

Under the terms of the agreement, the tour operator – who are the official travel partners for England Netball – will promote La Manga Club and its extensive array of sports and leisure facilities, which include a new European Cricket Performance Centre – the only one in Europe – three 18-hole golf courses, a 28-court tennis centre and 2,000sqm Wellness Centre.

Chad Harpur, director of sport at La Manga Club, said: “The resort is thrilled to be working with Smile Group Travel for the next three years. Their track record in organising sports tours in a wide range of different markets is second to none and we’ve been extremely impressed with the professionalism and expertise they’ve shown when we’ve worked with them before.

“La Manga Club is regarded as one of the world’s premier sports destinations, and this new partnership will only serve to enhance our global reputation as a leading venue for sports groups of all levels and ages.”

Smile Group Travel was founded by cricket lover and qualified coach Graeme Walker in Barbados in 2008, and organises tours and events all over the world.

The tour operator has worked with some of the biggest names in sport, especially cricket, with its extensive client list including the likes of county champions Essex, Hampshire, Sussex and Kent; the Lord’s Taverners; and England World Cup winner Lydia Greenway.

Walker said: “La Manga Club is a name that is synonymous throughout the sporting world. The resort shares the same passion for sport that we do and it’s a great privilege for us to have signed this agreement.

“With a wealth of five-star sports and leisure facilities – including the fantastic new cricket centre and first-class netball facilities – and a wide choice of accommodation, La Manga Club has so much to offer across the sporting spectrum for people of all ages, and we can’t wait to start promoting the resort to new and existing markets.

“We have always received great feedback from the groups that we’ve sent to the resort in the past and this deal will allow us to improve the service we can offer even further. Not only we will be able to offer groups ground support while they are at the resort, but we will also be expanding the number of tournaments, bespoke tours and high-quality training camps that we can offer to men and women, while also opening up the exciting possibility of multi-sports tours.”

The agreement is the latest significant sports partnership that La Manga Club has secured this winter with the resort launching a new Chelsea FC Foundation Soccer School this Easter, as well as becoming an official sponsor of The Tennis Podcast – one of the game’s most exciting and innovative new media outlets – and signing a three-year deal to host the prestigious European Senior Club Tennis Championship.

Also the official overseas training base of the Lawn Tennis Association, La Manga Club’s extensive facilities include three 18-hole golf courses and a Golf Training Centre, a 28-court tennis centre, a High Performance Sports Centre and 2,000m² Wellness Centre. There is also a five-star hotel, four-star serviced apartments and townhouses and more than 15 bars and restaurants.