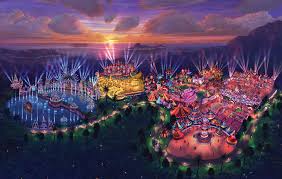 Carnival Magic is a theme park that showcases Thai culture through technology and lighting. They are confident that this new theme park will go well beyond the imagination and quickly become popular among both local tourists and international visitors.

Kittikorn Kewkacha, the CEO of Phuket FantaSea, says this newest theme park project was first discussed in 2002, as an increase in tourist numbers was taking place. They aim to draw 1 to 2 million tourists from other countries to visit the theme park.

They anticipate that they will make up 70% of the total number and will be key to generating revenue at least 1.50 billion baht a year.

It’s understood that Carnival Magic will consist of different zones, including a shopping area, children’s rides, a 3,000-seat buffet restaurant, a 2000-seat theatre spread over 16,000 square metres, and River of Bliss, a luxury restaurant inspired by the Thai festival of Loy Krathong.

A lagoon area named Luminarie will also have a “River of Lights”, consisting of millions of lights decorating the curved steel around the lagoon, stretching for 5 kilometres.

Carnival Magic will be situated on 100 rai land next to Phuket FantaSea in southern Kamala. The construction is costing 5 billion baht and the theme park is due to open in early 2020.