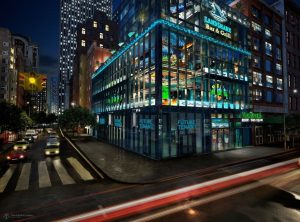 New York City will have 65 percent more hotel rooms than it did in 2010 — a mind-boggling jump from 87,000 to 144,000 rooms. The building boom goes on despite recent declining occupancy and revenue.

NYC & Company, the city’s official marketing organisation, has compiled a list of all the new inns either in construction or soon to start. The growth reflects confidence in a tidal wave of visitors (business travelers and tourists) that hit a record of close to 70 million in 2019 — up from 48.8 million in 2010.

But so much new inventory as well as competition from Airbnb are taking a bite out of business. Overall city hotel occupancy for 2019 is down by 1.2 percent over 2018; average room rates are down 2.3 percent; and RevPAR — the industry benchmark of revenue per available room — was off 3.6 percent, according to industry tracker STR.

Most of the new projects were set in motion before the recent modest dips in business. Others still in the planning stage are likely to be rushed to beat new restrictions by the City Council on hotel development that would require most projects to undergo review by the Council. The measure, backed by the powerful Hotel Trades Council union, is likely to be approved by Mayor Bill de Blasio.

Here are a half-dozen of the most interesting new projects. All are supposed to be finished in 2020 or 2021, but precise opening dates haven’t been set.

The second Riu in the Times Square area will add 650 rooms to those already on the block between Sixth Avenue and Broadway. Tribeach Holdings is behind the rising, 48-story tower, which was originally planned to be 27 stories with only 343 rooms, It will join neighboring inns The Edition, Oyo and Sanctuary, as well as a 660-room jumbo called TSX Broadway, to replace the demolished DoubleTree at the Broadway corner.