At the New York Times Travel Show 2019, India received Award of Excellence for ‘Best in Show’! 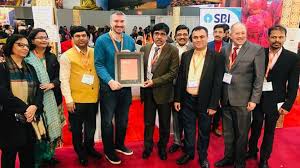 Ministry of Tourism, Government of India took part as the ‘Presenting Partner’ in the New York Times Travel Show (NYTTS 2019) hosted at Jacob K Javits Centre, New York with a target to increase its tourism promotional efforts in the US, improve visibility of India and to grow its share of US Outbound travel market.

A high level delegation headed by Shri Yogendra Tripathi, Secretary, Ministry of Tourism, Government of India and several stakeholders from the tourism industry of India took part in the Show.

Also, the Tourism Secretary had words with many leading US travel professionals at the Trade Key Note Session during the Show and requested for their constant support in placing India in the US. India was honored during the Closing Bell Ceremony at the New York Stock Exchange.