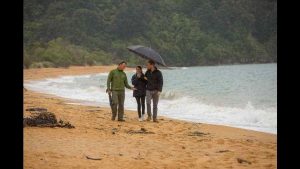 New Zealand has been showing off some of its own crown jewels and hidden gems to the royal visitors the Duke and Duchess of Sussex.

On the second day of their visit to Aotearoa New Zealand the royal couple went off the grid into Abel Tasman National Park on the north-western tip of the South Island and a coastal region renowned for its golden sands, turquoise waters and emerald green native forests.

The royals flew by helicopter from Wellington across Cook Strait landing at Totaranui Beach, at the western edge of the park. Totaranui is a popular camping spot at one end of the Abel Tasman Coast Walk, one of New Zealand’s Great Walk network of multi day hiking trails.

Away from the crowds in Wellington, the Duke and Duchess enjoyed a few quiet moments walking on the golden sands of Totaranui Beach with a park ranger and learning more about the history of the forest and the environmental challenges of protecting the habitat of New Zealand’s youngest national park.

They were officially welcomed to the region by the local Māori iwi (tribe) and joined some of the park’s young conservation ambassadors from Project Janszoon, one of several volunteer conservation groups, and local school children at a barbeque lunch.

Department of Conservation park ranger Andrew Lamason was impressed by the passion and interest of the Duke and Duchess.

“They were such an impressive couple –  the amount of knowledge they had. We talked about urbanisation of people and how important it is to have places like this.”

“His [Prince Harry] passion for the environment is real. He talked like an ecologist would talk – his depth of understanding not only about New Zealand issues but global issues around the environment was really impressive.“

“It’s not something he’s just sat and decided he’s going to learn over the weekend – he really understood this stuff so it gives you a lot of hope for the future.”

“They were impressed with the untouched vastness of the area as they flew in – coming to the huge expanse of forest with beautiful golden coastline stretched around New Zealand – stunning! I said you should see it on a good day mate.”