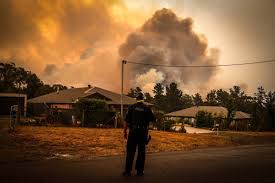 Intense smoke from huge bushfires in Australia is drifting as far away as New Zealand, which is 2,000km (1,200 miles) away, leading to deep miasma and a burnt smell in the air, that escalates air pollution. Australia is grappling with this disastrous bushfires crisis fuelled by record-breaking temperatures and months of drought.

The smoke first reached New Zealand’s South Island on 31 December turning skies a hazy yellow. Since then, the south’s famous glaciers have vanished in haze and even North Island has seen its skies turn “eerie”.

At least 18 people are confirmed to have been killed by the bushfires, which have burned vast areas of several Australian states reaching a deep downfall to tourism revenues. Most of the tourists are stranded and a mass evacuation had been launched. Several people are still missing and conditions are expected to worsen over the coming weekend.

The tourist flights up to Tasman, Franz Josef and Fox glaciers are a popular way to experience New Zealand’s stunning mountain scenery. But for the past days, national and international visitors have endured a thick yellow haze, instead of the white snow and bright blue skies expected.

Australia and New Zealand are separated by around 2,000km (1,242miles) of the Tasman Sea. The satellite images released by Weather Watch show exactly how the smoke was moving across the Tasman Sea from Australia’s shores to hit New Zealand. The peaks around the tourist city of Queenstown, further south from the glaciers, were also covered in haze.

Over the past days, the people of Dunedin on South Island woke up to a noticeably darker sky, according to local media, and there’s been a strong yellowish twilight over the town. The pictures from Akaroa near the south’s main city of Christchurch also showed an striking sky with the hills shrouded in haze.

By Thursday, the haze and burnt smell had also reached the North Island.