New Zealand Welcomes the Duke and Duchess Of Sussex 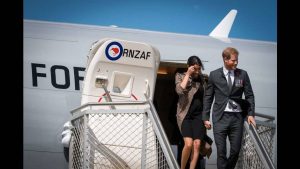 Aotearoa New Zealand has welcomed the Duke and Duchess of Sussex as only New Zealand can do it.

Wellington blew a fresh kiss across the airport tarmac, just enough to ruffle the Karen Walker trench coat the Duchess was wearing, and New Zealand Prime Minister Jacinda Ardern greeted the royal couple as they arrived on their first official visit as a couple to New Zealand – setting the scene for the warmest of royal welcomes with culture, ceremony and cheering crowds.

By the time their first afternoon and evening was over, the royal couple had experienced a powerful traditional Māori powhiri on the lawns of Government House, laid a wreath at the Tomb of the Unknown Soldier, negotiated crowds of cheering fans on the streets around Pukeahu National War Memorial Park, and the Duchess had impressed with her first words in te reo Māori.

New Zealand Prime Minister Jacinda Ardern and her partner Clarke Gayford were on the tarmac at Wellington Airport to welcome the royal couple on their arrival from Australia.

From there, the royals drove to nearby Government House – the historic residence of the Governor-General of New Zealand Dame Patsy Reddy – for a traditional Māori welcome on the lawns.

As part of the ceremony, the Duke and Duchess both joined in a hongi (clasping of hands and gentle pressing of noses) with the Governor-General’s Kaumātua and Kuia (Māori elders), before the pōwhiri, which included a haka performed by members of the New Zealand Armed Forces. The welcoming party included young people representing groups of scouts and guides, and a primary school. The ceremony also included a 21-gun salute.

Crowds of enthusiastic locals were on hand at Pukeahu National War Memorial Park to watch as the royal visitors laid a wreath at the Tomb of the Unknown Warrior and inspected the newly unveiled UK War Memorial – a spectacular life-size bronze sculpture designed in the form of two of the United Kingdom and New Zealand’s most iconic trees, the Royal Oak and the Pōhutukawa.

On Sunday evening the royal couple were guests at a reception at Government House, hosted by the Governor-General to celebrate the 125th anniversary of women’s suffrage in New Zealand. The Duchess, who appeared wearing a Māori tattoo-inspired diamond necklace by New Zealand designer Jessica McCormack, seized the occasion to introduce her speech with a few words in te reo Māori.

New Zealand’s capital city is the first stop in a four-day visit which will also take the royal couple to Abel Tasman National Park, Auckland and Rotorua.

Tomorrow, the royal couple will fly across Cook Strait to the South Island to visit Abel Tasman National Park.