Nigeria to reintroduce its national airline in December 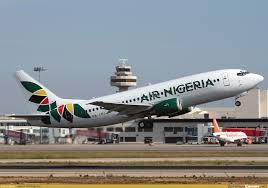 Nigeria is going to reintroduce a new national carrier nearly 15 years after the previous state-run airline, Nigerian Airways ceased operations. The new airline will be known as Nigeria Air.

Nigerian Minister of State for Aviation, Hadi Sirika made the announcement and unveiled the new branding of Nigeria Air and livery for the airline at the Farnborough International Airshow in the United Kingdom.

The name was chosen after Nigeria’s Ministry of Aviation invited Nigerian youth and students to contribute “their ideas and creativity in developing the new Nigerian Flag carrier.

According to Sirika, the federal government hopes to launch operations by the end of the year.

Nigerians have greeted the announcement with skepticism as they expressed uncertainty about the federal government’s capacity to sustain a national airline, especially considering its track record with previous national carriers.