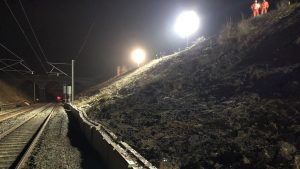 Emergency night-time work is taking place to repair multiple landslips beside the railway between Coventry and Rugby.

Network Rail engineers are working at night so passengers can keep moving safely in the day on the West Coast main line between Birmingham New Street and London Euston.

In early February 2020 a landslip was detected in a cutting at Church Lawford, near Rugby, on the West Coast main line.

There have now been four landslips along this 150m stretch of railway.

Engineers are working as fast as they can to carry out £3m of emergency repair work so trains can continue to run on the line.

The railway cutting was due to be reconstructed after 2024, but this has now been brought forward to stop a major incident blocking Britain’s busiest mixed-use (freight and passenger) railway.

In the day trains must run through the area at a maximum of 50mph as a safety precaution.

Luke Swain, senior asset engineer at Network Rail, said: “Passengers travelling through this stretch of railway may have been wondering why their trains have run slower than normal recently. Well, this is why. We are working night and day to keep the railway safe and keep people moving.

“This is an absolutely vital part of the railway between Birmingham New Street and London Euston, and we want to make sure that passengers get the service they deserve on this route.

“The sheer amount of rain we’ve had over the last few months has put us in a tough spot, but we’re working hard to get our plan into action to secure the affected area and provide a safe and reliable railway for passengers.”.

One team member is assigned, 24 hours a day, to physically monitor the area for any further ground movements.

The landslips have been caused by a number of exceptionally rainy months in the period leading up to February 2020.

The Met Office has now confirmed last month as the wettest February on record.

Silt and clay in the cutting embankments have soaked up a large amount of water leading to four separate landslips on this stretch of railway.

The earth is being made secure again. After the slipped material has been cleared from site, a new retaining wall will be built at the foot of the embankment.

After this, engineers will replace silt and clay in the cutting with special rocks that fit better with the slope.

This will provide better drainage within the cutting and prevent any further slips in future.