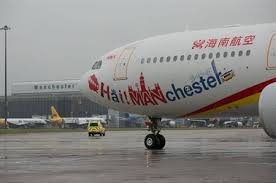 The direct Manchester-Beijing flights boost North England’s tourism industry. The economy of North England is going high after the collaboration of tourism development with China.

According to a study by the consulting firm Steer, the record growth in travel and tourism is moving high than the average. The Chinese visitors to the North grew 38 percent since 2016, compared with 30 percent across the country, Manchester Airport said in a statement about the findings.

The international and national visitors also began spending more. President Xi announced the Manchester-Beijing route during his state visit to the U.K. in October 2015 and Hainan Airlines began the service in June 2016. In those two years, the average spending per visit in the North West increased by 94 percent to over 2,000 pounds ($2,613), exceeding the national figure.

Mayor Andy Burnham said that they have really seen the success of the first route to China from Manchester Airport, so we hope to see more being added in the future. The study shows that good connectivity is not just about getting people and products from A to B, but the wider impacts that they have on so many aspects of peoples’ lives at both ends of the route.