Northeast US swept by winter storm, life in shambles 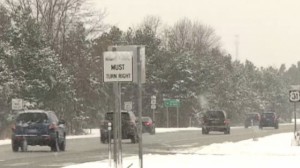 A winter storm warning is in effect until 6 p.m., and the city has urged residents to avoid unnecessary travel.

The three main local airports — Newark, La Guardia and Kennedy — are expecting disruptions. The airlines recommend checking flight statuses ahead of travel. By 7:30 a.m., nearly 1,700 flights had been cancelled at the three airports. That’s about half of their daily fights.

Rail service is running with adjustments on eight lines because of the storm, and it will be cross-honouring tickets on bus, rail and light rail lines.

Schools and businesses across the Northeast are closed as the storm moves through. The National Weather Service predicted that parts of New England could get up to 18 inches of snow before the day is out.

Philadelphia, which is expected to see up to eight inches, declared a snow emergency to keep cars off the streets. The Pennsylvania Turnpike lowered its speed limit to 45 miles per hour and most of the flights from Philadelphia International Airport had been cancelled.

The governors of Massachusetts and Connecticut urged people not to travel unless necessary and told nonessential state employees not to come to work. The National Weather Service posted coastal flood advisories for much of the eastern-facing coastline of Massachusetts.

State offices in Rhode Island were also closed to nonessential employees, and Providence was expected to receive up to 17 inches of snow.

Snow began falling lightly in Boston on Thursday morning, with 18 inches or more expected by the end of the day. It is likely to be the biggest test for the city’s beleaguered public transportation system since the winter of 2015, when extended cold and four major snowstorms crippled the system and led to a $100 million investment in winter weather fixes.

According to a map of ploughed streets compiled by the city, some areas of the city that had not ploughed as of 9 a.m. included parts of:

The storm was already affecting the workday around 5 a.m. on Thursday.

In Brooklyn, a delivery driver, Ray Lopez of East New York, waited for the Q52 bus at a stop along Woodhaven Boulevard near Jamaica Avenue, the wet snow falling around him but not sticking to the pavement. But Mr. Lopez figured that would change as the temperature fell.

“Luckily, all my stores are on the main roads,” Mr. Lopez, 41, said. “There’s nothing on the side streets.”