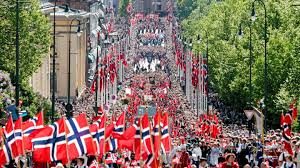 Norway is celebrating Constitution Day which recognizes the country’s constitution by the Eidsvoll Assembly in 1814, recognising Norway as a kingdom independent of Sweden after the Napoleonic Wars. This occasion is a nationalistic spectacular of red and blue featuring children’s parades, traditional “bunad” folk costumes, flags flying and marching bands. During this occasion, Norway sees the arrivals of millions of tourists from different parts of the world.

Essentially Norway’s answer to the Rio Carnival or St Patrick’s Day, a party atmosphere prevails with no hint of the military triumphalism or jingoism that can complicate equivalent occasions elsewhere.

Norway National Day begins early for adults with a 7am champagne breakfast, typically also comprised of scrambled eggs, salmon and fresh loaves of bread, before revellers hit the streets to enjoy the marches, games and rousing public speeches. The women wear the customary clothes of their ancestors, while the men, more reserved, typically opt for their best suits and an occasional top hat.

The royal family spends the day waving to party-goers from the Royal Palace balcony in Oslo, before strolling through the capital’s parks to greet well-wishers. The country’s largest parade passes through Oslo city centre and is commonly comprised of as many as 100,000 people.

The shops may be closed but alcohol is nevertheless in abundance. The children in particular relish Constitution Day as they are generally given carte blanche to eat as much ice cream and as many waffles, cakes and hot dogs as they like, hang the consequences.

The day was first celebrated by students post-1814 but was banned outright between 1820 and 1829 under orders from King Karl Johan of Sweden while the two neighbours were united. It became an established tradition in 1833 when poet Henrik Wergeland gave a public speech honouring Norwegian heritage beneath a monument to reformist government minister Christian Krohg.