Home » Norway will use environmentally friendly airline fuel from 2020

Norway will use environmentally friendly airline fuel from 2020 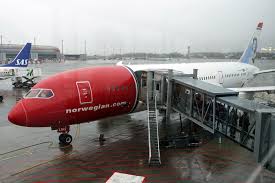 The airline companies operating in Norway must use more environmentally friendly jet fuel mixed with biofuel from 2020.

As part of Norway’s push to cut greenhouse gas emissions, the minority center-right government said the aviation fuel industry must mix 0.5 percent advanced biofuel into jet fuel from 2020 onwards, a move which will force airlines to use the more costly fuel.

This corresponds to around 6 million liters of what is also known as second-generation biofuels, a product of waste and leftovers, and cannot be based on palm oil, Norway’s Climate and Environment Minister Ola Elvestuen.

The biofuels for aviation cost around two or three times more than regular jet fuel, according to a report by Norway’s environmental agency, the civil aviation authority and state-owned operator Avinor, he added.

However, as there is no functioning market for biofuels in aviation, the real prices are uncertain.

The a quota obligation of 0.5 percent advanced biofuels can correspond to a price increase for the airlines of around 54 million Norwegian crowns annually. This cost amounts to roughly $6.6 million.

Even though there are other initiatives and trials around the world, Elvestuen said Norway’s move to legislate biofuels use in aviation may be the first bill introduced worldwide on the topic.

The aviation biofuels, now produced in small volumes from renewable sources, are expected to play an important role in delivering the goal of carbon-neutral growth in airline CO2 emissions from 2020.