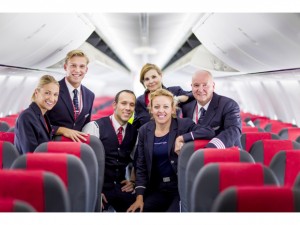 Norwegian has been named Europe’s Leading Low-Cost Airline 2018 for the fourth consecutive year at the 25thannual World Travel Awards, one of the travel industry’s most prestigious awards.

The World Travel Awards were established in 1993 to acknowledge, reward and celebrate excellence across all key sectors of the travel industry and they are recognised globally as the ultimate hallmark of industry excellence.

Bjorn Kjos, Norwegian’s CEO, said: “We are very proud to have been once again voted Europe’s leading Low-Cost airline which is a reflection of the dedication of our 9,500 colleagues. Norwegian continues to offer exceptional value across our expanding global network and is recognised as an industry leader in the low-cost sector. We would like to thank the thousands of customers and industry peers that have once again cast their vote for Norwegian.”

Graham E. Cooke, President & Founder, World Travel Awards, said: “Winning is tough but staying on top is even tougher, and Norwegian has proven its world-class credentials by winning ‘Europe’s Leading Low-Cost Airline’ for the fourth year in succession. The airline’s rapid expansion, both short-haul and long-haul, exemplify the World Travel Awards mission to push the boundaries of travel excellence.”

Throughout 2017 and into 2018 the airline continued its global expansion plans and now serves more than 150 destinations in Europe, North Africa, the Middle East, Asia, the Caribbean, South America and the US. 2018 marked a milestone year for the airline as Norwegian proudly launched its first route to South America with a direct service from London to Buenos Aires and its first route between London and Singapore. Transatlantic services were also increased with new flights from London to Chicago and Austin.

This latest award adds to the growing accolades that Norwegian has already received in 2018 including Best Wi-Fi in Europe and Best Overall Passenger Experience Low Cost Carrier Europe at the Passenger Choice Awards; and Airline Programme of the Year Europe and Africa at the Freddie Awards in recognition of the airline’s customer loyalty programme – Norwegian reward.

The 2018 World Travel Awards took place on 30th June 2018 at the Europe Gala ceremony in Athens.