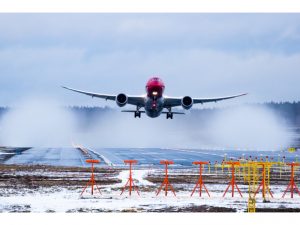 Norwegian carried more than 2.6 million passengers in January, an increase of 13 percent compared to the same month previous year.

A total of 2,638,958 passengers chose to fly with Norwegian in January, 305,026 more passengers than the same period last year. The total traffic growth (RPK) increased by 18 percent and the capacity growth (ASK) increased by 27 percent. The load factor was 76.1 percent.

“We are very pleased with the continued passenger growth in January, a month traditionally characterised by less demand. Norwegian has been through a period with significant growth, but now the company will change its strategic focus from expansion and growth to profitability,” said CEO of Norwegian, Bjørn Kjos.