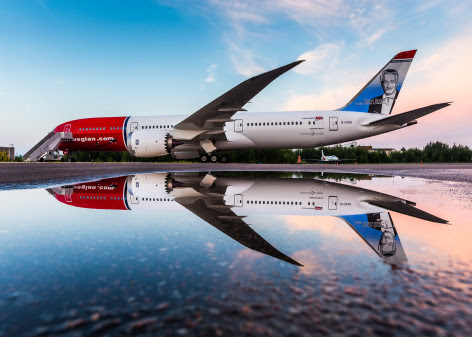 Norwegian carried 2,877,549 passengers in November, an increase of 357,329 passengers (14 percent) compared to the same month last year. The total traffic growth (RPK) increased by 26 percent this month, driven by a 34 percent capacity growth (ASK). The load factor was 78.8 percent.

The traffic figures this month are influenced by the transition from summer to winter operations, as well at the launch of several new routes and increased aircraft utilization, compared to the same month previous year. Norwegian’s passengers continue to fly longer distances, which also effects this month’s figures.

“I am pleased that there has been a positive development in yield this month. At the same time, several of our summer routes have been extended into November, which has affected the load factor. A full transition into the winter program will take place early next year, once the busy holiday season is behind us,” said CEO Bjørn Kjos of Norwegian.

Norwegian operated 99.2 percent of the scheduled flights in November, whereof 82.5 percent departed on time, up 2.3 percentage points compared to the same month last year. Norwegian’s fleet renewal program continues in 2018. The company took delivery of one Boeing 787 Dreamliner and one Boeing 737 MAX 8 this month. In total, Norwegian will take delivery of 11 Boeing 787-9 Dreamliners,12 Boeing 737 MAX 8 and two Boeing 737-800 aircraft this year. With an average age of only 3.7 years, Norwegian’s fleet is one of the world’s “greenest” and most modern. The single most important action an airline can take to reduce its environmental footprint, is to invest in new aircraft and new technology.