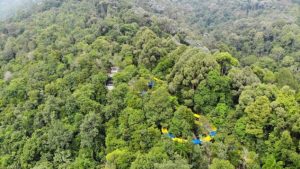 The world’s longest waterslide has been installed at Malaysia’s Escape theme park located on the island of Penang.

It takes visitors a full four minutes to whiz down the 1,140-metre long waterslide which winds its way across a 70 m slope covered in natural forests and tree canopies.  The previous record for world’s longest waterslide was held by Action Park, a theme park in New Jersey.

Among the many attractions of the waterslide are its obstacle courses and zip wires. The waterslide structure is made of fibre-reinforced polymer and is a permanent structure attached to steel poles. Guests need not slog their way up to the top of the waterslide as they can reach the top via cable car. “There was never any intention of breaking the world record. I am always baffled with the idea of short and quick rides. So, I wanted to build rides that last a good few minutes and visitors enjoy it with non-stop smiles as they fly through the rainforest” said Sim Leisure Group CEO Sim Choo Kheng.

Hill Rider and Tubby Racer will also be installed alongside the slide. No heavy machinery has been used to create the new rides as part of the environmental-friendly measure of the Group. Most works of the new rides have been done manually.

Penang’s Escape Park has been rated number one theme park in the country and it attracted 185,000 visitors in 2018 and the number is expected to grow further this year.

Penang is more famous for its culture and cuisine than its thrills. George Town, the main city of the island is a colourful mix of cultures. It has Hindu and Buddhist temples, street art, Islamic mosques, British colonial architecture and beautiful Chinese manor houses. Penang is also popular for its world’s topmost food destinations. Malay, Chinese and Indian cuisines are most popular over here.