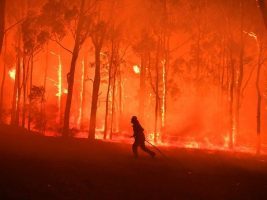 One NSW bushfire has jumped a containment line as firefighters struggle to contain around 150 blazes statewide.

The Interloop Trail fire in Port Stephens is being continuously monitored by the firefighters after northwesterly winds helped it breach a containment line and move closer to Salt Ash-based Air Force weapons range.

In the firefighting work, containment is a certain level of control, which is a parameter set up by parameters as to how much fire’s edge they can stop from expanding.

Residents in Medowie and nearby townships have been asked to stay alert in the wake of recent development.

Residents living near the Little L blaze near Singleton and North Black Range fire near Braidwood have also been issued the same warning after winds gusts reached speeds of 70km/h in few parts.

There is a total fire ban for greater Sydney, central ranges, greater Hunter, and northwestern regions including the Blue Mountains, Bathurst, Orange and Walgett.

Till Saturday, around 150 fires were burning statewide mid-afternoon, with 50 uncontrolled.

The Rural Fire Service has now warned that the conditions might worsen over the coming week with one regional command telling residents that it is high time for residents to decide what they can do when bushfire hits their areas.

RFS’s Northern Tablelands Team has even posted a message on its social media page asking residents to be ready with their firefighting plans.

Meanwhile, a portable radio repeater has been severely damaged which had been providing critical communications for fire crews in northern NSW. It is not working any more.

This is supposed to hamper the potentially endanger fire crews working to protect life and property. The Northern Tablelands Team has posted this message on their social media page on Saturday.