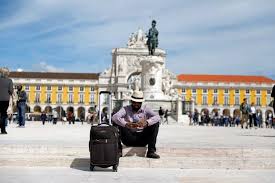 The number of foreign tourists who travelled to Portugal rose only 7.5 percent to 22.8 million in 2018, a sharp fall from a nearly 17 percent jump the previous year due to a decline in visitors from Britain, its largest market.

Portugal’s tourist numbers have risen uninterruptedly for eight years and the sector has been a powerful growth engine as the country exited a 2011-14 debt crisis.

But the government has shown concern that Brexit could hurt Portugal’s tourism sector and earlier this year Lisbon launched a campaign to attract British tourists.

The number of British tourists fell 5.3 percent in 2018 from a year earlier, data from the National Statistics Institute (INE) showed on Friday. There was also a drop among German visitors.

A weaker pound is potentially making destinations outside the euro zone, such as Turkey, more attractive.

On the other hand, Portugal received more visitors from North America, Spain, Brazil and China, with a 24 percent increase in the number of tourists from the United States in 2018, the data showed.

Last year, the number of guests staying in hotels and other types of accommodation grew to 25.2 million and overnight stays stood at 67.7 million, an increase of 5.1 percent and 3.1 percent respectively compared to 2017.

Growing by 6.5 percent in 2018, the domestic market generated 19.9 million overnight stays. But overnight stays of external markets only increased 1.8 percent, significantly less than the 12.2 percent increase reported the previous year, signalling that the tourism boom is slowing.

The total contribution of travel and tourism to Portugal’s gross domestic product reached 17.3 percent, or 33.5 billion euros (30.7 billion pounds), in 2017, according to the International Tourism Association.

Portugal’s INE estimates are more conservative, putting the tourism sector contribution towards the country’s GDP in 2017 at 13.7 percent. Data for 2018 is not yet available.