Odesa has great potential to become a global tourism destination 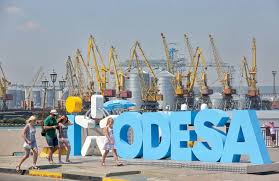 Odesa, a city of 1 million people, which is around 476 kilometers south of Kyiv and home to Ukraine’s largest seaport infrastructure, is all set to become an international economic hub and world-famous tourist destination.

But the city’s persistent corruption, poor infrastructure and high port tariffs are eating away Odesa’s potential, according to civic activists and businesspeople.

The mayor of the city Trukhanov and his business partners have been accused of trying to monopolize the most lucrative businesses in Odesa, including real estate and municipal tenders.

Oleksandr Varvarenko, the head of Odesa based cargo shipping firm Varamar Group, said that Ukraine’s port tariffs and duties are the highest in the world, and described Ukrainian ports, including Odesa’s, as some of the worst in the world, which makes it difficult for them to contend internationally.

Ihor Tkachuk, the CEO of the Odesa Sea Port Authority, said that he is negotiating plans to build a bypass road around EuroTerminal’s facilities to encourage competition.

“We’ll build a bypass to remove obstacles for private businesses and make sure that one company doesn’t have a monopoly,” he said.

Another obstacle for doing business in Odesa is the lack of a modern and well-functioning international airport. The city’s airport is ramshackle and should have been closed a long time ago.

The airport is in the process of building a new runway, which is scheduled to be in operation later this year. The airport is also known for its high service fees for international flights.

Moreover, the airport offers fights to few international destinations for a city of such size and economic importance.