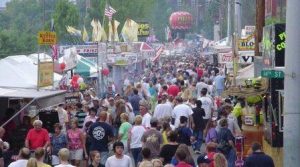 The Upper Ohio Valley Italian Heritage Festival has been cancelled for the first time in its 38-year of history. The cancellation comes in light of the ongoing COVID-19 pandemic that has resulted in numerous events and festivals being cancelled or postponed across the globe.

The 38th Annual Undo’s Upper Ohio Valley Italian Heritage Festival was scheduled to take place through July 24-26 at Wheeling’s Heritage Port. It is one of the biggest annual festivals held in the city of Wheeling and even in the state of West Virginia. Every year the festival attracts tens of thousands of visitors to the Ohio Valley during the peak of summer.

Even a whole slate of vendors and entertainers had already been booked for the event this year. The tourism and occupation associated with the festival now stand threatened in the face of the coronavirus outbreak.

Janice Whipkey, Event coordinator, Undo’s Upper Ohio Valley Italian Heritage Festival said in a statement that this year marks the first-ever cancellation of the festival. She mentioned that with regards to reports provided by scientists, the coronavirus is unlikely to go away before the summer. She informed that there remains a high chance of resurgence around the time of the festival. Therefore, she said that the authorities did not have a choice other than cancelling as they are dealing with people’s lives.

She further added that all necessary individuals were booked, all arrangements were made and everyone was ready but a decision had to be made as this is the time for deposits. She mentioned that the cancellation will have a huge economic impact in the community as it is a major festival. She concluded informing that the board will immediately start making plans for the forthcoming year with the hope to make the upcoming festival bigger and better.

Around Thursday, last week the board members for the festival met virtually to discuss all possibilities. Though there was an initial hesitation regarding the cancellation, but the members ultimately opted for the safety and well-being of the people.

The board has planned to announce the cancellation at a later date, but word leaked out beforehand. The board did not get a chance to inform all of the vendors, entertainers, city leaders and everyone else who will be directly affected by the cancellation. On Tuesday, Whipkey informed that they were still in the process of making calls to personally inform everyone of the latest changes.

Irrespective of the cancellation scholarships of the Upper Ohio Valley Italian Heritage Festival for the year will still be awarded. As scholarship funds are made possible by donations to the organization’s foundation, the cancellation of the festival itself will not affect the scholarships. The person selected as the Italian-American of the Year will be recognized during next year’s festival.