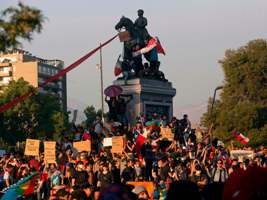 Ongoing protests in Chile led to significant declines in the country’s hotel occupancy during the final two weeks of October. The steady decrease which became most noticeable the day after a government curfew was instituted (20 October), pushed Chile’s occupancy down 10.5% for the month. The country’s 58.8% absolute occupancy level was the lowest for any October in STR’s Chile database.

Based on year-over-year comparisons, 24 October was Chile’s worst occupancy day with a 50.8% drop in the metric. In absolute terms, occupancy reached as low as 30.3% on 30 October. Those results were largely a result of performance in Santiago. The capital saw 11 consecutive days of double-digit occupancy decreases—the worst coming on 24 October (-45.7%). The occupancy in the country’s key hotel market fell to as low as 31.4% on 30 October.

Patricia Boo, STR’s area director for Central/South America said that Santiago was already facing a challenging year with a healthy amount of new supply and less demand from neighboring Argentina. The situation has been made even more difficult because of the instability in the country. Fortunately to this point, hoteliers have been able to hold room rates steady to lessen the impact on revenue per available room. That pricing confidence will continue to be tested with such little demand in the marketplace.

While performance has fallen in most of the country, the STR-defined sub-market for Santiago International Airport and its surrounding area saw a performance increase near the end of the month, with occupancy up as much as 40.4% to 72.1% on 28 October. Boo attributes that growth to the area’s distance from the primary protests as well as flight disruptions forcing travellers to seek overnight accommodation.