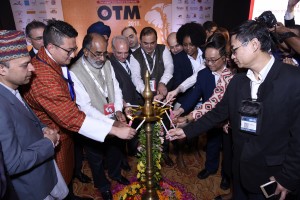 , the largest travel trade show in the Asia Pacific region concluded on an optimistic note. 1000+ sellers from 50+ countries and 27 states networked with 10,000+ trade visitors, at Bombay Exhibition Centre, between 18th to 20th January.

The show was inaugurated by Shri. K J Alphons, Minister of State for Tourism (I/C), Government of India. In his inaugural address he expressed his delight seeing the turnout of the global participants. He also expressed satisfaction about the mix of international and national participants at the show floor – approximately 400 and 600 respectively.

Guest of Honour Shri. Jaykumar Rawal, Minister of Tourism, Government of Maharashtra remarked that Mumbai was proud to host the leading travel show in the Asia Pacific region. He also marvelled at the long history of OTM as an offshoot of the oldest travel trade show in the country.

In an exit survey, 98% of the participants confirmed they are likely to return to OTM 2019. More than 90% opined that participation in OTM was a must. They also found the organisers humble and applauded them for best client servicing.

Many sellers appreciated the quality and value addition ensured by Fairfest Media, the organisers of OTM. According to their feedback, OTM is the best in class travel show globally and has assisted them in generating a large number of business enquiries from the Indian market.

Several hosted buyers confirmed that they have been ensuring their presence at OTM for many years now. A number of them exclaimed that they had graduated from visitors to hosted buyers. The access to online meeting diary has assisted them to plan in advance and spend quality time with decision makers one on one.