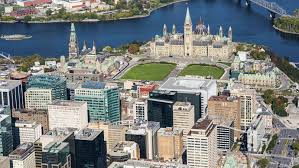 Ottawa celebrated 150 year of Canadian Confederation in 2017 which was a year-long series of special events.

Visitor spending saw a 10.3 per cent increase topping CAD$ 2.3 billion. Michael Crockatt, Ottawa Tourism president, that the numbers reveal incredible growth our tourism industry has seen as part of the year-long celebration of Canada’s 150th anniversary. The investment in the city has paid off and they were excited to continue the momentum through 2018.

For international travel the UK is Canada’s largest overseas source market and the nation is growing even more popular among the British Holidaymakers. Emma Cashmore, UK director for Ottawa Tourism mentioned that 2017 was an incredible year for Canada’s capital.

The same enthusiasm is moving forward into 2018 and now for 2019 travel. The UK travel trade is at the heart of their growth strategy and they will work with their partners to position Ottawa as year round destination.