OUT Bermuda filed lawsuit to cancel the ban on gay marriage 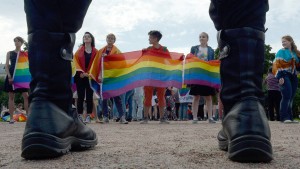 OUT Bermuda, a non-profit organization is a supporter for LGBTQ rights in Bermuda. This week, they have recently filed a lawsuit against Bermuda’s attorney general to get the same-sex marriage ban canceled. Same-sex marriage remains lawful as the ban is not anticipated to take effect before June.

The current same-sex marriages will remain valid. Previously, voters had expressed their support for banning same-sex marriages.
Early signs of a chilling effect are showing up as Bermuda became the first country to cancel same-sex marriage in the world at the early part of this year, and the decision of the government has drawn the repercussion of many tourists and celebrities who are calling for a tourism boycott of the island.
Maryellen Jackson, a confirmed gay Bermuda resident and teacher, is a co-plaintiff in OUTBermuda’s lawsuit. In the lawsuit, Jackson and OUTBermuda asserted the repeal of same-sex marriage breached the constitution of Bermuda.
Carnival Corporation explained this week that it is aiding the lawsuit and opposes the ban.
Last month, Jackson explained that she joined the lawsuit and anticipates negative consequences for tourism as a result of the ban. “I do think there will be some negative consequences that may not even be considered,” she said.
“We just don’t know how people will react,” said Jackson. “People are going to travel where they want to travel. I would think the LGBTQ community may think twice and choose to support human rights and not come to a place that doesn’t value all it’s people equally.”
“I don’t think we’ll know the long-term impact this decision will have on this issue,” she said.