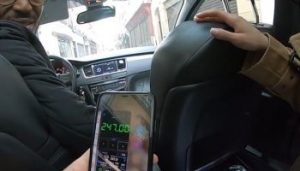 The tourists in Paris are warning others after a cabbie tried to scam them into paying almost five times the real cost of a taxi — and then got angry when they refused.

The couple, from Thailand, filmed an incident in which a taxi driver tried to charge them an eye-watering fee of €247 ($385) for a 45km ride from Charles de Gaulle Airport to the city centre.

The official Paris cabs charge a flat rate from the airport of €50 ($78) to anywhere on the Right Bank of Paris and €55 ($86) to anywhere on the Left Bank. It’s based on rules introduced in 2016. The driver angrily insists his €247 fee is correct and argues with the couple after they challenge it.

He tells the couple taxi fees in Paris were “not fixed price. It’s by (the) meter.” The meter appears to be an app on the driver’s phone. The video shows the driver getting angry when the couple demand to see his license. He also lunges towards the back seat to stop one of the tourists filming him with his phone.

At one point, the couple ask to be taken to a police station so they can sort out the matter. After many tense minutes of arguing, the couple eventually agree to pay a compromise price of €200 ($311) so they can finally get out of the cab. One of the tourists, Charkrid Thanhachartyothin, told Le Parisien the driver had locked the doors.

The driver said he belonged to Chauffeur Prive. It is a legitimate company but its website advertises a flat rate of €45 ($70), The Independent reported. The couple has already left Paris, but police are understood to be investigating the incident. They said they wanted their experience to be “a case study for other Thai people or travellers to be conscious while they are travelling.” Paris is the third most visited city in the world, with 17.44 million tourists visiting in 2017.