Overtourism is now an overwhelming concern 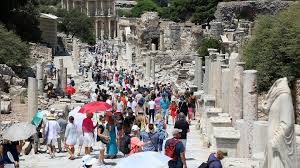 In 1953, mountaineers Tenzing Norgay and Edmund Hillary made the first summiting of Mount Everest, the world’s highest peak. Recently, Everest has become so popular that photos are coming up frequently, depicting huge lines of climbers aiming to conquer that same peak. On rarefied ground where once only Norgay and Hillary walked, climbers are now dying due to overcrowding.

This growth in numbers is propelled by a lot of factors. Apparently, disposable incomes have grown around the world, with China’s gains especially striking in the recent years. People are living longer and having fewer children, giving them the time and freedom to travel more. Areas that were once off-limits are now more accessible. The world has become more peaceful and open since the end of the Cold War.

Technology has also played a principal role. Air travel is now cheap and available almost everywhere. Tickets, hotels, tours and local transportation can now be booked online. The internet has opened the doors of information about global tourist destinations – from Japanese hot springs to California wine country to Iceland’s glaciers. Recently, Google Maps has made it much easier to find way out in a strange country; translation apps have made foreign-language communication less intimidating; Uber offers trouble-free transportation in many international cities, and Airbnb has expanded the range of available accommodations.

Tourism is indeed big business now for countries that manage to attract hordes of visitors. The World Travel and Tourism council estimates that the amount of economic activity in the tourism sector is much larger, reaching $8.8 trillion in 2018, supporting around 10% of all jobs on the planet.

However, tourism has a downside as well. As the Everest example shows, traveling to many popular destinations is subject to congestion externalities. When you visit a famous place, your presence makes the experience just a little less convenient and comfortable for everyone else. Multiply that effect by the millions, and the world’s tourists are crowding each other out of a good time.

For cities, such experience can be even more distressing. Even as tourist dollars flow into local businesses, hordes of travelers damage infrastructure that is unable to handle so many human bodies. These problems are only going to get worse, with more countries in Asia, Africa and elsewhere joining the ranks of developed countries.