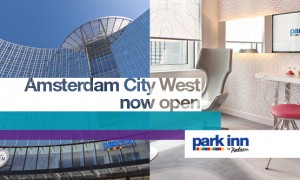 The world-renowned designer Karim Rashid, who has created several iconic prizeotels across Germany, is helping us add a whole new dimension to Amsterdam. Welcome to the Park Inn by Radisson Amsterdam City West, in The Netherlands.
The hotel’s 476 rooms and suites feature Karim Rashid’s signature color scheme; bold, sensuous and spacious, beautifully spilled over curved walls.

Yilmaz Yildirimlar, Area Senior Vice President for Central & Southern Europe, Radisson Hotel Group, said: “We have waited a long time for this beautiful addition and unique MICE product to our group. Thanks to the cooperation and trust of the owner group Omnam, we bring a brand new Park Inn by Radisson experience to one of the most vibrant and creative cities in the world. As of today, we operate four hotels in Amsterdam, a city that attracted 17 million visitors last year, and is home to 180 different nationalities.”

Park Inn by Radisson will offer the most colorful meeting rooms in Amsterdam. A 680sqm ballroom, with a separate pre-conference area, spans over two floors. Combined with the opera-style balcony, the space can host up to 750 delegates in theater seating, making this hotel one of the biggest conference hotels in Europe.

19 break-out rooms are connected with three pre-conference areas, all equipped with high-quality, state-of-the-art technical and media facilities. Our signature free high-speed wireless Internet is available throughout the entire hotel, including public areas.

The Den restaurant is set to serve the best of Amsterdam for breakfast, lunch and dinner, while the lounge offers ample space and opportunities for informal meet-&-greets with a drink or two.

Özgen Sağinc, General Manager of the Park Inn by Radisson Amsterdam City West said: “Amsterdam pushes the boundaries. We are so much more than a traditional hotel; we have tried to keep up with the Dutch traditions and created a designer hospitality hub that is full of life, energy and color in one of the most visited, most loved and innovative cities of the world. My team and I guarantee travelers from all over the world coming to Amsterdam will be wowed by the Park Inn by Radisson Amsterdam City West.”

Karim Rashid, Designer of VEN said:“Inspired by my belief that the contemporary, physical world can be warm, soft, human, seamless and pleasurable, Park Inn by Radisson Amsterdam City West encapsulates a radiant spectrum of experiences for guests to enjoy.”

The Dutch capital is one of the richest cities in the world, when it comes to innovation, diversity and inclusion, historic attractions, and a cosmopolitan lifestyle. There is nothing like Amsterdam. 58% of the population cycle daily on the 881,000+ bikes in the city, which has 165 canals, 8 windmills, 1,281 bridges, 75 museums, 55 concert halls and theaters, 1,325 restaurants and bars, 2,500 houseboats, and so much more.