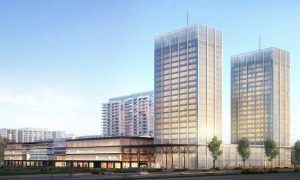 Elie Younes, Executive Vice President & Chief Development Officer, Radisson Hotel Group,said: “We’re excited to bring the Park Inn by Radisson brand to Uzbekistan, a country where tourism is growing rapidly. In 2018, Uzbekistan welcomed five million tourists – with Tashkent being a popular choice among travelers as the country’s most cosmopolitan city. We’re delighted to be bringing a new brand to such a vibrant region and offering this market something fresh and exciting.”

The partner of this project is LLC “Lotus Gas Invest”, the owner of the brand Real House, one of the leading construction companies in Tashkent.

The new-build Hotel & Serviced Apartment project, due to open in 2021, will consist of 300 rooms – including 50 serviced apartments, a conference hall, five meeting rooms, a gym, an all-day dining restaurant, a lobby lounge/bar and a Sky Bar.

Park Innby Radisson is an upper midscale hotel brand that delivers stress-free experiences, good food and upbeat environments. This will be 24th Park Inn by Radisson Hotel across the Russia & CIS region bringing the portfolio to 6194 rooms – keeping the brand as the largest midscale brand in the region.

The hotel will be located in Tashkent City – the largest and the most ambitious real estate project in Uzbekistan. It will have a prime city center location and is part of the large-scale development called “Tashkent City”, consisting of business centers, congress halls, shopping and leisure complexes and residential districts due to be completed by Q4 2021.

Tashkent is the most visited city in Uzbekistan followed by the ancient cities of Samarkand and Bukhara. It is the cultural and political center of the country, rich in museums and Soviet-era monuments.

The hotel will have easy access to the historical city center and will be located only 6km from International Airport (TAS) named after Islam Karimov and 4km from Tashkent main train station.