Home » Passenger Record For Swedavia In 2017

Passenger Record For Swedavia In 2017 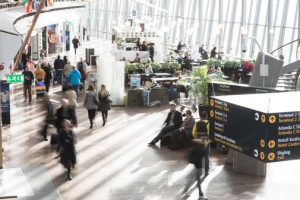 Air travel to and from Swedavia’s airports was up six per cent in 2017, when nearly 42 million passengers flew to or from one of the Group’s ten airports. That is a new record and a six per cent increase compared to 2016.

“Air travel creates the conditions needed to enable people’s opportunities for meetings and experiences. The passenger increases in 2017 also show how important it is that we focus on our investment projects and continue to develop Sweden’s sustainable and efficient airports of the future,” says Jonas Abrahamsson, president and CEO of Swedavia.

In December, 3,015,000 passengers flew to or from one of Swedavia’s airports.

Swedavia is a State-owned group that owns, operates and develops ten airports across Sweden. Our role is to create the access Sweden needs to facilitate travel, business and meetings – inSweden, in Europe and around the world. Safe, satisfied passengers are the foundation of our business. Swedavia is a world leader in developing airports with the least possible environmental impact. The Group has revenue of almost 5.5 billion Swedish kronor and some 2,500 employees.