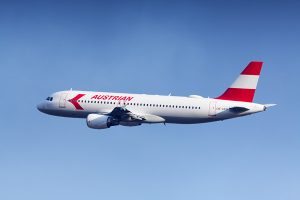 About 1.3 million passengers flew with Austrian Airlines in April 2019, comprising an increase of 5.9 percent from the prior-year month. The long-haul flights to North America developed positively in particular. Passenger volume was up 18.2 percent on these routes.

The total flight offering measured in available seat kilometers (ASK) was up 6.8 percent, and revenue passenger kilometers (RPK) climbed 12.5 percent. Capacity utilization (passenger load factor) of the flights equaled 81.4 percent on average in April 2019, an increase of 4.1 percentage points compared to the previous year. The number of flights operated by Austrian Airlines was increased by 2.1 percent to a total of 11,895.

“Despite our increased offering capacity utilization on our North American routes was up 7.3 percentage points to a total of 86.4 percent”, says Andreas Otto, Member of the Management Board and CCO of Austrian Airlines. “These excellent numbers are showing, that our strategy to expand our flights to North America is sound.”

Austrian Airlines transported more than 3.9 million passengers in the months from January to April 2019, comprising a rise of 6.9 percent from the previous year. The flight offering measured in available seat kilometers was up 6.9 percent, and revenue passenger kilometers climbed 9.1 percent compared to the first four months of 2018. Capacity utilization of the flights amounted to 75.6 percent, an increase of 1.6 percentage points. The number of flights operated by Austrian Airlines was up 3.9 percent to 40,649 in the months from January to April 2019.