Passengers in the Norwegian cruise injured as furniture flew 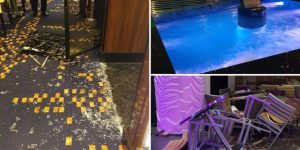 A cruise liner was hit by extreme winds on Sunday night, with several passengers injured after furniture flew across the ship.

It was sailing off East Coast of the US when gusts led to a strong tilt to the port-side before midnight.

Video revealed that passengers on board wanted to get out of the way as tables and chairs went crashing across the floor. The bottles smashed to the ground from behind the bar.

A man said that he was on a lot of cruises but this thing never happened.

The passengers were crying and screaming in the background  and others tried to make their way across the room with difficulty.

Aaron Black, a passenger at the ship’s piano bar said that the whole ship just tilted to the side for about 30 seconds and everything suddenly started to move.

From, ‘Oh, this is normal’ to ‘ This is very unusual and probably should not be happening’ there was a surreal escalation.

The captain and cruise director were quick and throughout the night the crew went on checking passengers who were in their staterooms.

On Tuesday morning  the ship returned to Port Canaveral in Florida and the ambulances attended to those injured in  the incident.

The Norwegian Cruise Line tweeted that several injuries were reported but the guests were immediately treated by the ship’s medical staff.

The ship was not damaged, is fully operational, and continues on her scheduled itinerary.