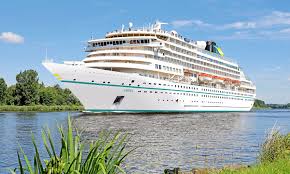 As a generous move and token of appreciation passengers of the Phoenix Reisen’s Amera Cruise collectively raised more than 40,000 euros for the crew members aboard the Amera.

According to Phoenix Reisen, during the 16-day return voyage from the Amazon to Germany, working with the ship’s officers, passengers initiated a fundraiser auction in the crew. The amount was donated to the crew welfare fund on the last morning at sea.

In addition to donating to the fund, an auction was held with memorabilia from the cruise. Among the auctioned items were the captain’s hat, the last Amera christening bottle, a signed lifebuoy, nautical charts and various other important or antique items.

As a result of the auction, the final amount collected by the passengers was a total of 41,788.01 euros. The whole amount has been asked to be paid to the crew members of the Amera.

Phoenix Reisen said it was extending a heartfelt appreciation to the guests who contributed and made such a noble effort on behalf of the crew. The company also mentioned that those alongside those individuals working in the tourism sector, the COVID-19 crisis has also created a difficult time for the crews on board the Phoenix ships similar to other cruises across the globe.

Germany-based cruise operator, The Bonn, together with its operating company, is assisting crew members of the Amadea, Amera and Albatros return to their families at the time of grave crisis. Among those, 200 Filipino crew have already been flown to Manila by a Condor charter flight. Phoenix Reisen mentioned that more flights would be following in forthcoming days.  Crew members from other nations such as Indonesia and Ukraine are also on their way home. The donation at such a trying moment is therefore, appreciated and will be useful to the crew in various ways.